Mission patches of this type are usually privately produced for crew member family and friends. These patches were part of a limited edition run for collectors. Manufactured by AB Emblem, the official NASA supplier to exacting detail. Beware of imitations and poor quality reproductions. 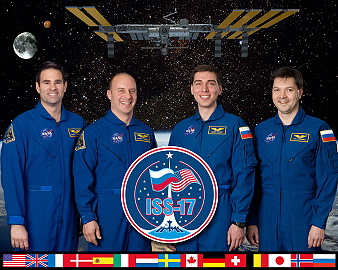 The Expedition 17 patch is meant to celebrate current human achievements in space as well as symbolize the future potential for continuing exploration. The Earth, represented at the bottom of the patch, is the base from which all space exploration activities initiate. The International Space Station (ISS), shown in low Earth orbit, illustrates the current level of space operations. The arrow and star point outwards, away from the Earth, towards the wider universe indicating the direction of future activities as human beings build on what has already been accomplished. The flags, representing the home countries of the crew members, Russia and the United States, are touching, highlighting the cooperative nature of the space program and symbolizing the merger of science and technical knowledge of these two experienced space-faring nations.