Official design, no crew names. This patch is from the official NASA design for the mission as featured on the crew image below. 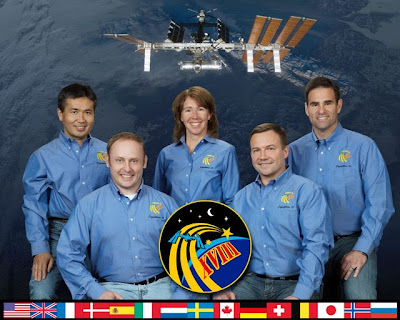 Expedition 18 crewmembers take a break from training at NASA's Johnson Space Center to pose for a group portrait. From the left (front row) are NASA astronaut Michael Fincke and Russian Federal Space Agency cosmonaut Yury Lonchakov, commander and flight engineer, respectively. From the left (back row) are Japan Aerospace Exploration Agency astronaut Koichi Wakata, NASA astronauts Sandra Magnus and Greg Chamitoff, all flight engineers. Chamitoff will launch to the International Space Station (ISS) on the STS-124 mission, joining Expedition 17 in progress and will provide Expedition 18 with an experienced flight engineer for the first part of its increment. Fincke and Lonchakov are scheduled to launch to the station in the Soyuz TMA-13 spacecraft from the Baikonur Cosmodrome in Kazakhstan in October for a six-month mission. Magnus is scheduled to join Expedition 18, replacing Chamitoff, as flight engineer after launching to the ISS on mission STS-126. Wakata is scheduled to join Expedition 18, replacing Magnus, as flight engineer after launching to the orbital complex on mission STS-119.