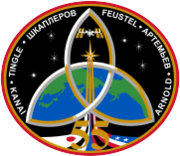 Expedition 55 is the 55th expedition to the International Space Station, which began upon the departure of Soyuz MS-06 on February 27, 2018. Anton Shkaplerov, Scott D. Tingle and Norishige Kanai were transferred from Expedition 54, with Anton Shkaplerov taking the commander role. They are currently in space.